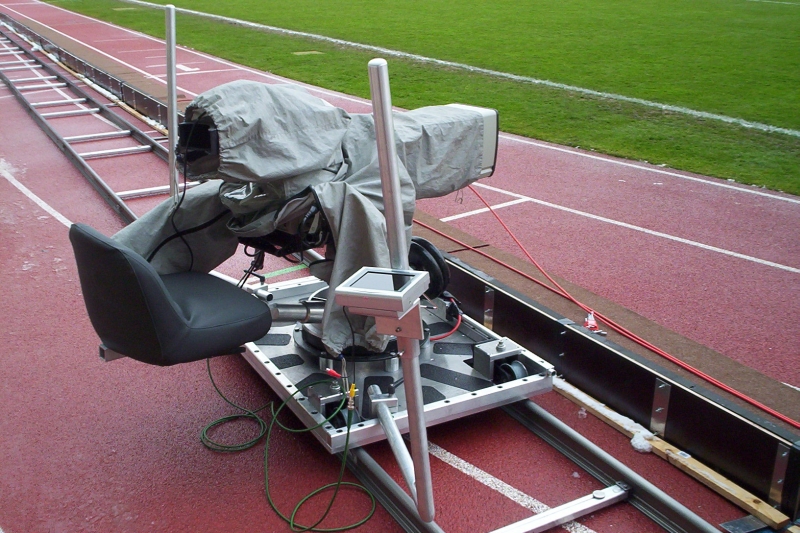 The Voyager 500 6.0 is a camera track system designed for camera movements with simultaneous panning from extremely low angles. Strictly speaking, though, the correct technical term for the system would be Track Cameraseat since it is a combination of an Orbiter camera seat and a track dolly running on straight and curved 62 cm standard tracks.

The most important innovation of the Voyager track dolly consists in the fact that it allows for shooting over 360° using any small or large camera/ lense set up.

Even when shooting with heavy cameras and large focal lengths up to 101 x, the system renders excellent picture quality.

Due to its patented bearing technique and central cable feeding the Voyager provides perfect handling and trouble-free movement with a range of 360° and has set new standards in sports broadcasting. It can be extended with an elevation unit or a light crane offering many spectacular camera movements.

As well, it can be used as a manually operated camera platform, to move a camera operator and conventional camera seat up.

The Voyager 500 superflat 6.0 comes with a triple-sealed, high precision center bearing, which provides smoothest possible, gentle and steady rotation combined with a steady friction improving the operating conditions significantly coming close to the characteristics of fluid heads. Comprehensive testing proved high durability even under extreme conditions in terms of temperature and mechanical impact.

Maintenance is reduced to almost zero.